The works of adventurous filmmakers screened freely, publicly and simultaneously in France and Poland. This intercultural encounter took place for several days in March 2017 and is an opportunity to see the new emerging talents by promoting their work to the large numbered and highly diversified public.

By inviting artists to invest atypical spaces that are close to the everyday life, it is a question of renewing our approach to the films and the space that surrounds us. While video art remains confined to the institutions, festivals, or on screens, FORMATOVA offers an original alternative: The continuous public diffusion of short films. Everyone will be able to attend freely and free of charge in the Paris and in the Gdansk-Sopot-Gdynia regions.

We are pleased to announce that a new city has joined into the IVF # 2! Thanks to the hospitality of the Institut Français, your films will also be broadcast in Krakow. We are very fortunate that our event will be part of the “La Saison Française 2017”.

Artists of all generations, known or lesser known, thus have the opportunity to emerge at the regional and international level, via Polish and Francilien showcases.

The theme of the I.V.F. II, free of interpretation, is: “I am not from here”.
With this in mind, we have opened a movie call, max 5 min. dedicated to new talents, French and Polish artists, so that the selected films are screened in the various public spaces of Paris and Tricy (Trojmiasto).

WHAT IS THE ARTISTIC OBJECTIVE OF THE ACTION ?

–          Make access to visual arts easier for the audience, using atypical as well as customary places, where ads are sometimes excessively present

–          Foster the presence of artworks in public spaces to spread it freely and without any charge.

–          Enhance the visibility of new talents and create a real network between French and Polish artists, working for the accessibility of art to a wider audience, in the context of Visual Art projects. 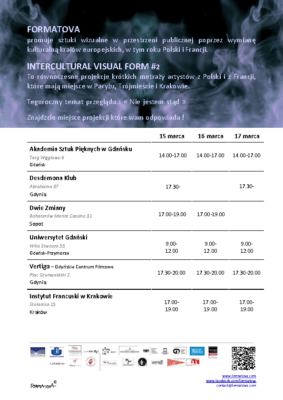 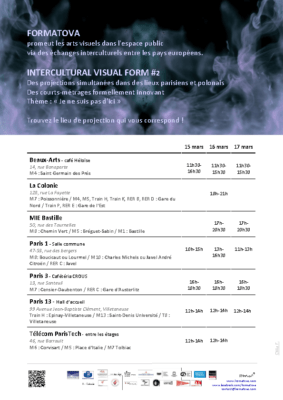 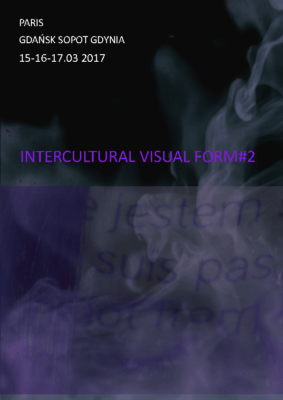 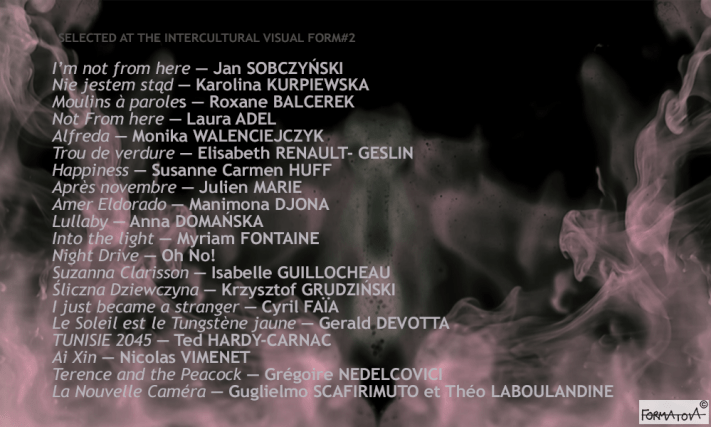 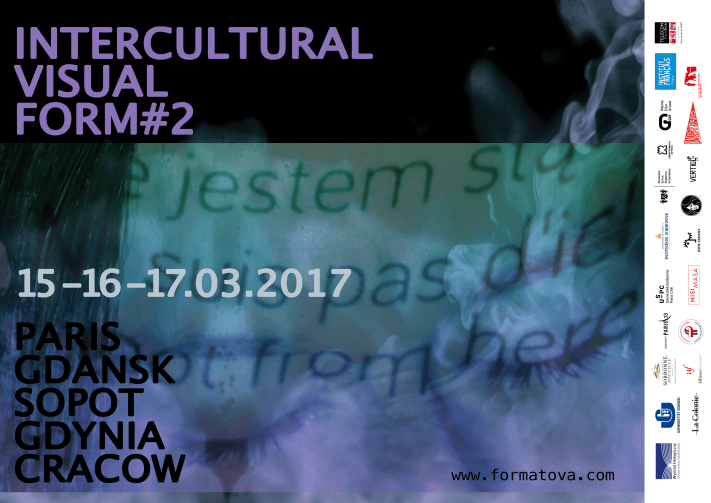 THE GENESIS OF THE INTERCULTURAL VISUAL FORM PROJECT

The association FORMATOVA returns in 2017 with the second edition of the Intercultural Visual Form project (I.V.F. II), a surprising intercultural event!

In 2016, the Intercultural Visual Form (I.V.F.) took the form of a competition for student short-films and the selected films were screened in atypical places in Paris, especially in institutions of higher education. The organization of a “competition” was then only a pretext, the real objective was the public projection of the lesser known works. This year, the event leaves the competition format, opens up to Europe and broadens its horizons!

With the I.V.F II, the winners are no longer competing with each other: it is to promote an art without competition. For this new edition, the videos will be selected by the association, and each one of them will be projected (at minimum) in two different places. The I.V.F. II is centered around the exchange, and this new format will create a network of passionate artists, motivated by the sharing of their works to the public.

In addition to the change of format, the I.V.F. II also changes the boundaries drawn by its previous edition. In France, the event goes beyond the academic spaces in Paris: the projection places will be located in all of other locations in the Paris region, with the aim of introducing art in places with the diversified public. In 2017, the I.V.F. II also opens to Europe by settling in Trójmiasto – Tricia, the composition of three neighboring Baltic cities: Gdańsk, Sopot and Gdynia in Poland. Inhabitants and passers-by from all horizons will have access to the film projections, thus laying the foundations for a larger project: to promote art freely and internationally.

Finally, by expanding, the I.V.F. II develops and perpetuates the project initiated by its previous edition: free access to visual art, valorize new talents and encourage artistic and social exchanges.

Throughout the year our association engages in various activities related to promoting visual arts in public spaces.